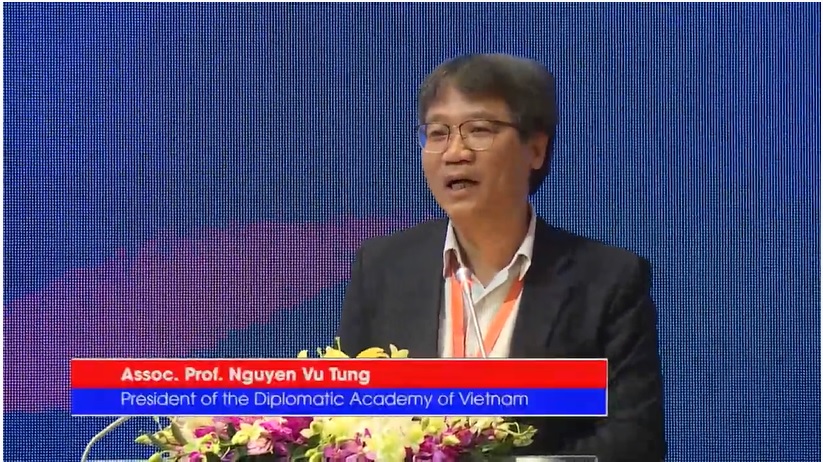 (Watch video of the original speech in here)

Hello again, I have a bad news and a good news. The bad news is that my staffs have prepared something like 20 pages of concluding notes for me to read, and I think it will take an hour. But the good news is that I don’t use them. Sorry my colleges. (Laugh).

I first of all would like to congratulate all the participants, especially the panelists, the commentators in the discussion, especially the moderators for fulfilling the agenda that has been set for our conference. All the panelists have done the excellent job in my view. And the moderators have been really strict, more or less in the time-keeping, and the participants are active in providing the comments and questions. So I really would like to invite all of us to be self- congratulating now. (Hand—clapping).

This leaves me with very light task of summarizing of the points that have been raised in the last two days and I think that I have almost no more to add, especially after we have two excellent concluding plenary sessions, where the panelist help us to review all the points that are connected to the previous sessions. The plenary sessions are really helpful in recapping all the points that have been raised in the current session. But I also have some, I would say concluding points that would recall the general theme about the conference that is cooperation for regional security and development in the South China Sea. We all heard for the last two days about rule –based order, and I think that is legitimate theme for us to follow and we all talk about the UNCLOS, 1982 and the COC and DOC and other arrangements, and agreement bilateral or multilateral.

I think that it is a great thing for us to recognize the important points of this treaty, convention ad agreement that serve as the back-borne for the rule-based order. We also agree that multilateralism is still alive, even though it is facing some challenges right now, but multilateralism is in greatness for the solution related to the South China Sea disputes. And we all agree I think that the importance of rule-based order and multilateralism lie in the very fact that the failure to abide by the UNCLOS, the failure to utilize fully the existing arrangement would lead to the situation we now have in the South China Sea, where the complicated situation is taking place and we agree from the outset of the conference that the situation seem to be more complicated than the one we have in the tenth conferences. It is reflected in the discussion about conference this year when we spend most of the time talking about the complicatedness related to the big powers’ rivalry in the South China Sea, the failure to solve the problem even the small one and I think that it leads to the even to the like our colleges just said few minutes/some minutes ago does not mean prospect of greater environmental degradation. And this is really alarming. And our discussion in the last two days also focus on the behavior or the activities, action by the claimants and the stakeholders that  include of course the claimants, the other countries including the US, India, Japan, Australia, New Zealand, Republic of Korea, EU, and I think that It is really the matter here that  we all agree and we all talk about China for most of the time and the expectation here is that China is now qualified to be talk about as a biggest claimant as well as  the rising power. And we all agree that it is here the great expectation that all the claimants and the stakeholders are expected to become part of the solution rather than part of the problem and I think we can be having more things to do along that line.

The last session, the point raised was that the SOUTH CHINA SEA dispute has become so internationalized and it get entangle in the big powers competition and rivalry, and it gives us the reason to be pessimistic about that. But the optimistic aspect of that is that we have the UNCLOS to rely on, and this year this reflected in the conference that we are celebrating the 25th anniversary of the UNCLOS and I think that the UNCLOS is the still serve as the foundation for all the possible solutions to the dispute in the South China Sea. So what we have to do I think is to abide by the UNCLOS, and to support the centrality of the ASEAN. I think these two lines also the basis for the policy choice for Vietnam, not only in general term of our foreign policy, but also in specific with regard to the South China Sea. So I am sure that many of the international participants or members of diplomatic corps are really wishing to know what are the choices of Vietnam with regard to the South China Sea.

The choices are many, but I think that the abiding by the UNCLOS and the supporting of ASEAN centrality like I said before would be the foundation for our foreign policy choices, and that would be the point of like to echo the major and general theme of the discussion in the session. I would like really to thank the panelists in the discussion and the participants. That helps us to get the conference to reach this final moment of today. I would like to thank the supportive staffs from the DAV from the Foundation for East Sea Studies, and of course the Vietnam Law Association, and the staffs of the Pan Pacific Hotel, that help us diligently behind the scene to make sure that everything go smooth for us to conduct the serious academic discussion.

The last thing I would like to say is that I would like to wish all the international participants of smooth and safe trips back home. In order to not only to promote the research on the South China Sea, but also to spread the information about our series of conferences. Surely, we would see each other again next year elsewhere in Vietnam for the 12th Conference. So I thank you very much again for your participant. And see you again, the panelists at the farewell dinner tonight. Thank you very much.