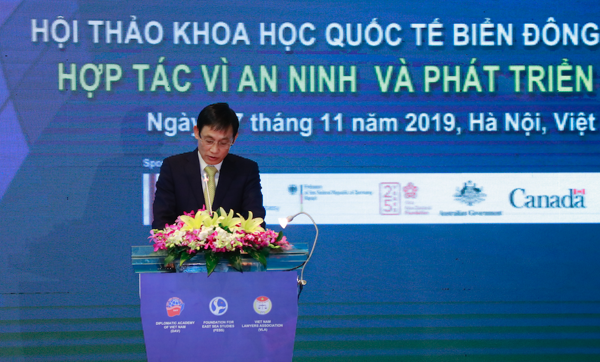 It is my great pleasure to join you and share my thoughts at this conference today. On behalf of the Ministry of Foreign Affairs of Vietnam, I would like to welcome all Excellencies Ambassadors and Representatives from the diplomatic corps and all distinguished guests from more than 20 countries and territories to the 11th South China Sea International Conference themed “Cooperation for Regional Security and Development”.

1. It is my great pleasure to join you and share my thoughts at this conference today. On behalf of the Ministry of Foreign Affairs of Vietnam, I would like to welcome all Excellencies Ambassadors and Representatives from the diplomatic corps and all distinguished guests from more than 20 countries and territories to the 11th South China Sea International Conference themed “Cooperation for Regional Security and Development”.

2. I would like to congratulate the Diplomatic Academy of Vietnam, the Vietnam Lawyers Association and the Foundation for East Sea Studies for organizing this event. We are sincerely delighted to meet with colleagues, officials, and prestigious scholars who travel over long distances to the Conference to discuss the South China Sea. This issue is very important for peace and prosperity of the region and the world.

3. Seas and oceans are always considered the “source of life” because they play an essential role in maintaining life on Earth. Occupying more than 70% of the earth’s surface, seas and oceans not only connect the continents and are significant space for states’ activities and interactions but also create the foundation for human life. International cooperation at sea, manifested in the coordinated actions of countries at bilateral, regional and global levels, is an inevitable need to protect the “source of life”. Cooperation could be seen through the harmonization of maritime activities and the resolution of cross-border issues.

4. The South China Sea is home to many of the world’s important and busiest maritime routes. The South China Sea is a trade route linking the Indian Ocean and the Pacific Ocean as well as the continent of Asia and the Oceania. Over 50% of world seaborne trade at 5 trillion USD worth passes through the SCS with annually. Therefore, maritime security and safety in the South China Sea are of great significance for global trade and common prosperity.

As the world’s economic and political gravity has been shifting radically, giving greater importance to the Indo-Pacific region, the South China Sea has an increasingly significant strategic value. Main strategic initiatives of the great powers and ASEAN have centered on the South China Sea or have the sea as a crucial component. Therefore, all developments in the South China Sea not only draw attentions of regional countries but also in the spotlight of the international community.

5. Conscious that the problems of ocean space are closely interrelated and need to be considered as a whole, the 1982 United Nations Convention on the Law of the Sea (UNCLOS 1982) addresses international cooperation in various fields such as marine life resources conservation and management, environmental protection, marine scientific research, response to crimes at sea, and overlapping and undelimitated seas. UNCLOS 1982, known as the “Constitution of the Ocean” with 168 members, provides the legal framework for the conservation and sustainable use of oceans and marine resources today. It is also acknowledged in the “2030 Agenda for Sustainable Development” adopted by the UN member states in 2015.

Based on the maritime legal order established by the UNCLOS 1982, many practical cooperation activities at regional and global levels have been implemented in response to common challenges, such as climate change, sea-level rise, fishery resources depletion, and plastic waste pollution as well as other security issues like maritime security and safety, anti-piracy and armed roberry at sea. The UNCLOS 1982 is also the leading foundation for resolving overlapping claims as well as maritime delimitation between states.

6. Cooperation in the SCS has been fostered in the past years. As the President of the Diplomatic Academy of Vietnam stated, when referring to the SCS, we not only talk about differences, disputes or complicated situations but also about cooperation at both bilateral and multilateral levels. There are over 12 maritime cooperation mechanisms within the ASEAN frameworks alone. Despite their diversed interests, regional and extra-regional countries have made efforts to foster trust, confidence and cooperative mechanisms such as the Vietnam-China Fisheries Cooperation Agreement in the Gulf of Tonkin, the Coral Triangle Initiative, cooperation to counter piracy via ReCAAP in Singapore etc.

Speaking specifically about Vietnam, we have different maritime cooperation mechanisms with all littoral states of the South China Sea at different levels in various areas. Maritime cooperation in the SCS does not limit within regional governments but also with extra-regional countries, international organizations and NGOs. More specifically, Vietnam and China are making efforts to delimit the opening of the Gulf of Tonkin. Joint patrols between Vietnam and China coast guards are conducted in the Gulf. Vietnam has been trying to settle maritime issues with other neighbours. Other ASEAN countries are also actively negotiating bilateral maritime disputes and searching for effective measures to address overlapping maritime claims. The Philippines and Indonesia have recently gained encouraging achievements in delimiting their EEZs.

In Hanoi next week, Vietnam, Canada and the EU will co-organize a conference on the implementation of UNCLOS 1982 within the ARF framework. ASEAN and its partners are struggling to construct a set of guidelines for handling collision at sea based on confidence, preventive diplomacy and conflict resolution via peaceful means.

7. Experiences from existing maritime cooperation mechanisms, including the ones in the SCS show that in order to advance effective maritime cooperation, we need five essential conditions: (i) countries need to have political will in promoting cooperation for mutual benefits, especially in the area of preserving peace; (ii) unanimous understanding of international laws concerning the sea, especially the UNCLOS 1982; (iii) suitable ocean management and cooperation mechanisms; (iv) active participation of both states and non-state actors; and (v) having confidence on international law and trust in multilateral mechanisms.

8. Against the mainstream of increasing maritime cooperation all over the world, we are concerned that there are emerging challenges to peace and stability in the SCS, including activities in regional water such as the serious violations of Vietnam’s EEZ established under international law. Unilateral interpretation of international law that differ from common norms and interests of the international community has undermined confidence on the effectiveness of the international legal system and eroded the rules of law and could become a dangerous precedent threatening peace and security in the region and the world.

The first opportunity is the overall trend towards peace and cooperation for development. Second, we have the Constitution for the Ocean, or UNCLOS 1982, serving as the legal foundation to address maritime issues, especially in relations among states. Third, the South China Sea is the spotlight of international attention. Fourth, coastal states to the South China Sea have all recognised the importance to promoting regional peace, stability and cooperation. Fifth, we have experience in promoting cooperation to address overlapping disputes through negotiations and other means in accordance with Chapter VI of the UN Charter on the obligation to settle international dispute by peaceful means. We all know these means, which include fact-finding, mediation, conciliation, negotiation, arbitration and international litigation.

There are enough mechanisms in the UN Charter and UNCLOS 1982 to apply these measures. But as you know, concerning the issue of cooperation and settlement of overlapping maritime claims and disputes, Vietnam has given priority to and gained significant achievements through bilateral negotiation with relevant countries.

But we also see three challenges. First, when disputes and differences emerge during cooperation, would countries’ position and claims be established in accordance with international law and UNCLOS 1982? Second, differences and challenges are inevitable because it is not easy to have complete scientific foundation for a wide variety of issues concerning maritime cooperation, overlapping claims and disputes. This is the fact not only in the SCS but also in other regions in the world. Third, how to promote cooperation over competition and avoid the possibility that competition overshadows cooperation.

9. Maintaining peace, stability and promoting cooperation in the South China Sea is not only the interest and responsibility of regional countries, but also that of the international community as a whole. We also expect that this Conference today will contribute in shedding light upon the following important issues:

– First, how to ensure the effectiveness of the 1982 United Nations Convention on the Law of the Sea in particular, and the rule of law in general? We should discuss whether or not the UNCLOS 1982 provide the solutions to certain issues. While it is correct that UNCLOS 1982 does not address every issue, there are areas that are covered explicitly by UNCLOS. We should also think about the relation between UNCLOS 1982 and general international law, and how to address the discrepancies in interpretation and practical implementation of this Convention?

– Second, how to further the important role of multilateral mechanisms in discussing and finding solutions, and promoting cooperation in the region? While the role of the United Nations continues to be of importance, we could also deliberate on how to enhance the central role of ASEAN and utilize effectively other regional cooperation mechanisms. We all know that in other parts of the world, there are regional cooperation mechanisms with the participation of extra-regional partners and international organizations. For instance, FAO may play a role in regional fishery cooperation, just as UNEP can contribute in terms of environmental cooperation. As the Chair of ASEAN in 2020, Viet Nam hopes to closely coordinate with other partners to enhance and elevate the effectiveness of ASEAN mechanisms on maritime cooperation.

– Third, by what means and methods can states promote cooperation to address maritime emergencies? Such issues can range from addressing disputes and differences on sovereignty, sovereign right and maritime claims, to matters of great significance to the livelihood of coastal communities, such as search and rescue, combating transnational organized crimes, development of sustainable fishery, humanitarian treatment of fishermen, and protection of environment and resources. How can we improve law enforcement capacity for coastal states?

11. I hope that this year’s Conference will continue its tradition from the past 10 years in upholding frank and candid discussions and accumulating good lessons from other forums to study their applicability in the South China Sea with an active and innovative approach. I also welcome the Conference’s approach of looking at the South China Sea from a larger perspective and in connection with other important seas such as the Polar regions, the East China Sea, the Indian Ocean and the Pacific Ocean.

12. I believe that policy makers, academia, researchers, officials and former officials who participate in today’s Conference will have frank, open and objective discussions as in the previous years. In this spirit, I wish the Conference successes in order to make the South China Sea a safe hub connecting the oceans, a sea of peace, friendship and cooperation for the common interests of all regional states and the international community.

I wish you the best of health, success and our foreign participants the best of time in Ha Noi during the Conference.

I thank you for your attention./.

Original full-text (in Vietnamese) can be download from here.